The public finances in NI: a comprehensive guide (November 2021)

The Fiscal Council has published the first edition of The public finances in Northern Ireland: a comprehensive guide.

The way in which decisions on spending and tax flow through the Executive, the Treasury, Stormont and Westminster is sometimes a mystery even to those directly involved. As we begin our work, we thought it would be sensible to start with a reasonably comprehensive guide to the region’s public finances, that we can update over time in response to users’ comments and suggestions, new data and future policy developments. 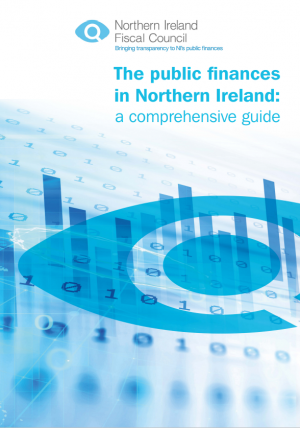 The report looks at the NI Executive’s finances – where the money comes from and where it goes, and how it is managed, legislated for and reported on. It also discusses how the Executive fits into the region’s broader governance arrangements and public spending and revenue picture and draws comparisons with the other devolved administrations.

The report is intended as a reference guide and to lay the ground for future Council publications, and is available to download here.

The public finances in Northern Ireland: a comprehensive guide is intended as a reference work rather than to push any particular conclusions or recommendations, however the Council has highlighted ‘10 takeaways’:

1.     Relative to its counterparts in Wales and Scotland (and to the UK Government in England), the Executive is responsible for a very large share of public spending in NI – almost £9 in every £10. But it raises a relatively small proportion of tax and other revenue – less than £1 in every £20. This reflects the Executive’s limited tax raising powers and the fact that it has responsibilities that fall to local councils or the UK Government elsewhere.

2.    The politics of Budget-making is trickier in Stormont than Westminster. Multi-party coalition hampers the reallocation of resources as policy priorities change, while the Department of Finance is less able to determine Budget outcomes than the Treasury. NI departments have greater autonomy relative to Finance and The Executive Office than UK departments to the Treasury and Number 10, and they do not observe collective responsibility.

3.    Taking the UK Government, the devolved administrations and local councils together, public spending is higher per head in NI than in the other regions (on both public services and pensions and benefits), while revenues are lower per head than in Scotland and England (reflecting lower wages and employment) but higher than in Wales. Consequently, NI runs the largest notional budget deficit of any UK region and has done for at least 20 years.

4.    Painting a coherent picture of what the Executive alone spends and where the money comes from is not as simple as it sounds. There is no single data source that reconciles spending, financing and the flows of cash between the UK Government and the Executive in a straightforward way – for one year let alone comparably over several years. We are trying to do this as best we can from different data sources, but this remains work in progress.

5.    Based on the best ‘money in and money out’ analysis we have managed to date, the Executive’s biggest areas of spending in 2020-21 were public services (63 per cent), state pensions and benefits (27 per cent) and capital spending and grants (10 per cent). These were financed from the Block Grant (65 per cent), other UK funding (29 per cent), income from fees and charges (3 percent) and Regional Rates and other income (4 per cent).

6.    The Executive’s Budget process focuses on public services spending, which falls within the ‘Departmental Expenditure Limit’ set by the Treasury and matched by the Block Grant. But, on the two recent occasions when public finance management has caused serious problems for the power-sharing institutions, this has been related to ‘Annually Managed Expenditure’, which receives less attention – namely welfare and the Renewable Heat Incentive scheme.

7.     When the NI Executive sets spending or charging policies more generous than those in England, this is referred to as ‘super-parity’. Examples include domestic water charging, welfare reform mitigations, tuition fees, concessionary fares and charges for domiciliary care, at a potential cost of over £600 million a year according to departments. ‘Sub-parity’ policies less generous than elsewhere are rarer but include childcare support.

9.    Despite being complicated by the politics of the multi-party coalition, the Executive’s Budget process is in some respects more open and transparent than the UK one. For example, the Treasury does not publish a Draft Budget for consultation or details of unsuccessful bids that departments make for extra resources. The timing of this Spending Review should allow a decent consultation period if the Executive can agree the Draft Budget reasonably promptly.

10.    The Executive received roughly £400 million a year from the European Union pre-Brexit, largely in Common Agricultural Policy (CAP) payments. It is still expected to receive almost £200 million this year because some non-CAP funding agreed pre-Brexit has yet to be fully disbursed while PEACE programme funding for NI and the border area of the Republic is ongoing. UK funding to replace EU funding is increasingly being routed directly to recipients rather than via the devolved administrations, which they have all objected to.